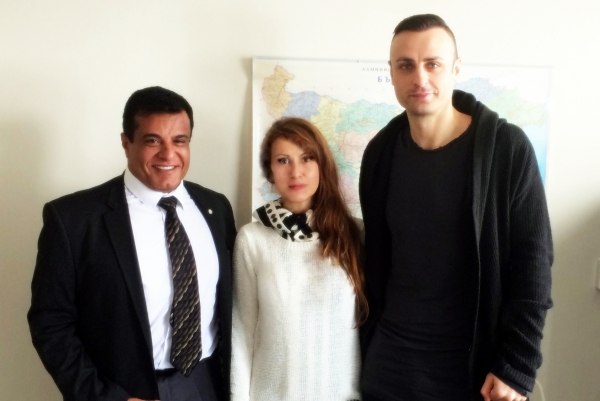 Mr. Katrieli met with Mr. Berbatov and Mrs. Hodjeva in the office of "Dimitar Berbatov" Foundation. Both sides expressed willingness for future cooperation for the sake of Bulgaria's development, support of talented children and in order to improve the atmosphere for social and humanitarian activism in Bulgaria.

Mrs. Hodjeva said that in the beginning of their work they encountered a misunderstanding of the mission of the foundation which was willing to help outstanding talents, instead of socially vulnerable groups. But in time the foundation was able to focus public attention on the talents and already more foundations are directing efforts to this group. Mr. Berbatov expressed satisfaction with the interest of Mr. Katrieli to the Foundation's activities.

Both sides expressed mutual respect and appreciation regarding humanitarian activities supported by foundations "I love BG" and "Dimitar Berbatov". The meeting was summarized by Mr. Katrieli with an invitation to join forces. The President of I love BG also explained that it is important to use the media and to make every effort to disseminate information on charitable activities to the public, as it will attract more people and more volunteers in favor of Bulgaria.